A ride of contrasts. The sea front of of the well-preserved Victorian resort of Llandudno is followed by a spectacular coastal corniche hugging the plunging limestone cliffs of the Great Orme. Then after a suburban interlude you reach the rural lanes and hamlets of the Creuddyn peninsula in the hinterland of Llandudno.

At West Shore Llandudno, after the circuit of the Great Orme, there are two options: 1) you can go to Deganwy via the new coastal cycle path with fine views of coast and mountains; but this path, though it is cleared periodically, often has one or two sections covered in soft sand, that sometimes together total about 100 m, where it is necessary to push a bike; or 2) you can avoid the sand and go by road.

(Photos of the Ride)

Ascent: 300m. The second part of the first half of the Great Orme section is a steady climb, after which one is rewarded by a long and enjoyable glide back to sea level. Later there are two further climbs - a long steady one to the obelisk and a shorter, sharp one into the village of Penrhynside.

Start: The sea front of Llandudno, near the paddling pool Grid Ref: 800822 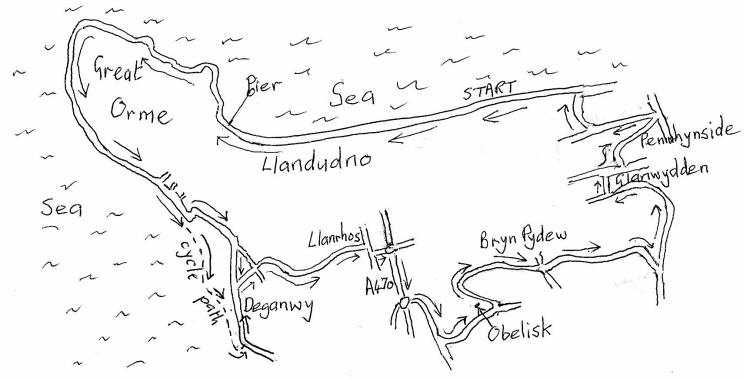 Go along the sea front passing the pier and the toll booth (for motors) at the entrance to Marine Drive and follow the road round the Great Orme.

(If you don't mind possibly having to push your bike over one or sometimes two short sections of sand, continue into the car park and go along the coastal cycle path to Deganwy promenade. Go along the prom which becomes Marine Crescent. Go over the level crossing and Turn Left. Turn 4th Right at a wide bend into Deganwy Road and continue with the route.)

Turn Right at the T junction following the road (Trinity Crescent) when it bends left.

Turn Right on to the main Road

Turn Left at the top of the hill into Ffrith Lane

Turn Right at Glanwydden at the Queen's Head pub

Turn Left into lane near the entrance to a housing estate

Llandudno is Wales's largest holiday resort. It has an exceptionally wide promenade, which the CTC believes would provide ample scope for a cycleway. Though this desirable improvement will no doubt come into being before very long, unfortunately at the moment cycling on the prom is forbidden.

The Great Orme promontory is a country park with a wild coast of dramatic limestone cliffs. The Marine Drive is nearly 4 miles long and makes a marvellous ride. There are usually not too many cars since the toll for vehicles is not particularly cheap. The highlight comes half way round at the top of a long climb when Puffin Island, Anglesey, Snowdonia and the Conwy estuary all suddenly swing into view.

The coastal cycle path to Deganwy offers superb views of the sea, mountains and the isle of Anglesey. However a 80-100 m section often gets covered in sand

The Obelisk is a modern folly of impressive design and construction and makes a splendid viewpoint, well worth the stroll of 100 yards or so to reach it. It does not commemorate anything, but was built (controversially) a few years ago by Bodysgallen country hotel to provide an interesting feature. It is on a Site of Special Scientific Importance.

The Creuddyn Peninsula is a rural backwater of quiet lanes and hamlets, despite being only a short distance from the hustle and bustle of a large resort.

Photos of the ride