Some years ago Welsh Highways erected signs saying the NCR 5 route between Conwy and Llanfairfechan is closed. The map below states that the route is 'unsuitable for leisure cyclists'. 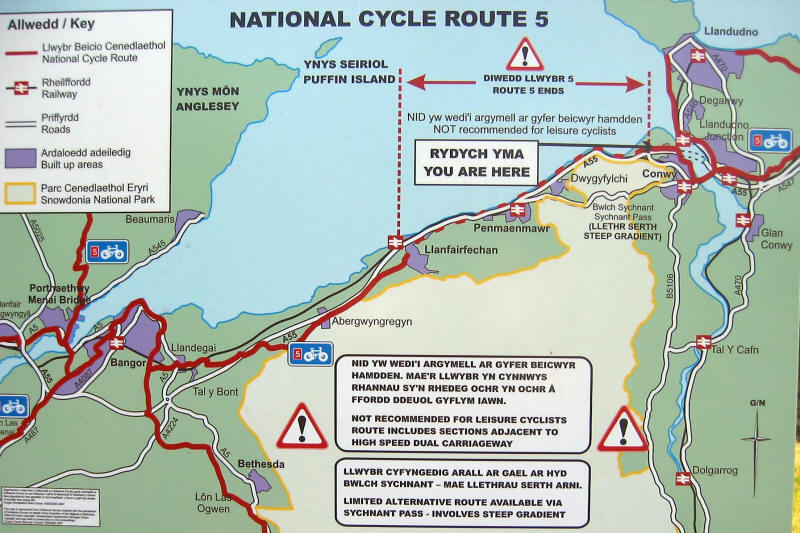 'Leisure cyclists' is a curious term indeed. How do we differentiate between those who cycle strictly for pleasure, and those who use a bike as their everyday means of transport. Is someone saying that those gritty, long distance touring cyclists, covering sometimes over a hundred miles a day, should be discouraged from using this major route to access Snowdonia and Ireland from the rest of the UK and Europe?

Since the 'route closed' signs appeared two superb new bridges have been opened at the Pen-y-Clip headland together with a finely engineered ramp linking them with Penmaenmawr promenade. Thus the problem that previously existed in safely cycling (or walking) from Penmaenmawr to Llanfairfechan has been completely resolved (click for detailed description of the route).

However, between Conwy and Penmaenmawr there is a seven tenths of a mile section of NCR 5 that goes along the fairly narrow footway beside the busy A55 expressway. Some cyclists are naturally nervous at riding in close proximity to heavy traffic at this point, though most experienced ones manage it without problem (See photos below).

As part of the Sustrans Connect22 project, a new scenic route across Conwy Morfa that would avoid using the exposed A55 footway has been designed and it is hoped funding for this excellent scheme will be confirmed in 2011 and that work on the path and the necessary railway bridge will start soon after.

There can be little doubt that this attractive route will give a great boost to cycling and walking in the area.